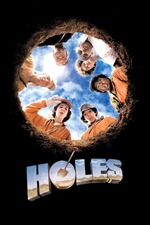 Shia LaBeouf made a very early screen performance in this 2003 Disney family film and doesn't actually do a bad job, at the very least he's far less annoying than the odious character he plays in the Transformer movies.
Found guilty of stealing a pair of shoes, he is sentenced to a juvenile prison camp in the middle of the desert where the other young inmates spend their days digging endless holes. What they don't know is that prison warden Sigourney Weaver is using them to hunt for a long lost treasure which has been missing for generations.
The back story is told with a rather cheesy, poorly directed flashback, but the rest of the film is decent. Jon Voight delivers a rather hammy performance, but it's not the sort of film where acting is scrutinised too much. A good rainy day film that doesn't require too much attention for all the family to easily enjoy.
6/10