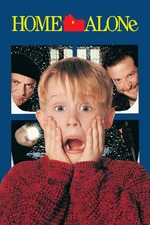 The most successful family comedy of 1990 may get less and less funny with each repeat viewing, but on it's original release it was a real hoot.
When his family oversleep and have to hastily get to the airport for a Christmas vacation, they accidentally leave 10-year-old Kevin alone in the upstairs bedroomc, not realising their mistake until their plane lands in Paris.
Kevin himself has the time of his life with no adults to spoil his fun. He raids his brother's bedroom, eats all the junk food he wants, watches inappropriate movies and gets up to all kinds of mischief, but when a pair of incompetent robbers try to break in, it's up to Kevin to foil their plans himself.
Writer John Hughes and director Chris Columbus do a great job rejuvenating slapstick comedy for a new era, and while the film does have it's flaws, it has to be regarded as a landmark film of the 1990's as well as a perennial Christmas classic (despite not actually having anything to do with the festive season).
8/10