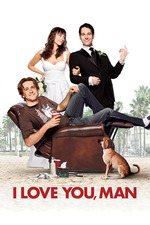 I Love You, Man

I Love You, Man puts a twist on the conventional rom-com, instead of focusing on him and her, it pokes fun at 'bromances' between guys.
Paul Rudd plays a workaholic estate agent who realises, as his wedding approaches, that he doesn't have a close male friend to make best man. On the hunt for one, he attracts the wrong kind of attention from gay guys, but eventually finds friendship with a charming but opinionated slacker (Jason Segel).
The comedy is very hit-and-miss, especially in the first half of the film, but works from the midway point due to the double act of Rudd and Segel.
Good enough for a fun movie to relax to, but don't expect too much from it.
6/10

I Love You to Death

I Know Who Killed Me