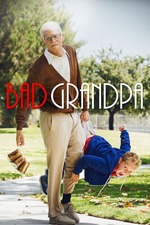 From the team that brought Jackass to our screens, you know before even watching that this going to be as low-brow and gross-out as you can get.
It's all just a series of hidden camera sketches with Johnny Knoxville laden in incredibly convincing old man makeup, trying the patience of regular folk as he pushes the boundaries of bad taste.
For the most part, it's astonishing to see people reach the end of their tether with what they see as an elderly fellow acting like a complete jerk as he goes on a cross-country trip with his 8-year-old grandson.
Some jokes are funny, but for each good one there's three questionable ones and it's clear too see that a few of the situations are staged.
The whole movie ends in a joke which was done so much better in Little Miss Sunshine (qv).
Overall, this kind of humour worked better in films like Borat & Brüno, where the reactions seemed a little more genuine and the situations were far funnier.
Perhaps it would have worked better pared down as a one-hour TV special. As a feature-length movie, it's more embarrassing than it is amusing.
5/10