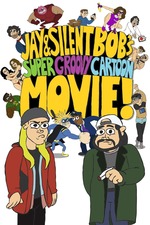 Jay & Silent Bob are back, in cartoon form, in this adaptation of Kevin Smith's Bluntman & Chronic comic book adventures.
This is quite possibly the film within a film which the duo were trying to stop being made in their 2001 film, Jay & Silent Bob Strike Back (qv), which makes sense, because the animation is very rudimentary and the sound recording is very amateur.
Like all Kevin Smith's films, the self-referential humour makes it important to have seen his previous films, but this doesn't appeal directly to his fans. It's a little too puerile for that. The fact that the villains are called Lipstick Lesbian, Cocknocker & Dick Head will suggest to you whether this will be your type of film or not.
4/10

Jay and Silent Bob Strike Back