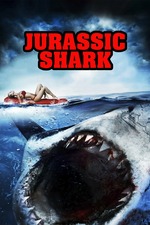 I honestly have no idea how some scripts get funded or how some films get a release, even if it is straight to home media.
Jurassic Shark is a terrible excuse for a film, parodying both Jaws and Jurassic Park, but not in a good way.
The shark of the title provides peril for a group of terrible actors as they wonder how to escape from it as wonder around on a spot of land that isn't an island.
Poorly written, atrociously acted, incompetently directed dross, with many shots which aren't even in frame and tinny sound quality that was obviously recorded on location with no post production work (or even a budget for it). The less said about the CGI effects the better.
The music is fine, but it really belongs in another film.
I understand that this film wasn't even trying to be good... so in that respect, it succeeded.
2/10