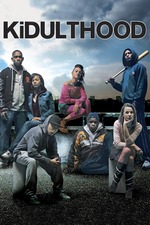 The title may be clever but the rest of the film has about the same level of intelligence as a piece of GCSE coursework in the wake of left-wing government in which everyone in Britain should just allow the uprise of unlikeable characters, drug abuse, chavs and shit rap music for the sake of diversity and equality... If I wanted to see this I'd just take a stroll through North London instead of watching a depressing movie about it.
Director Menhaj Huda and screenwriter Noel Clarke haven't done anything original here, they try to make everything look and sound realistic, raw and gritty but the end product is nothing short of pretentious.
Yes, Clarke's captured the way modern teenagers talk, but that's nothing to be proud of. All it does is glamourise the fact that the English language has been "bear butchered 'n ting".
Yes, there is a seedy side of London, as there is every other city in the world, but all this movie shows is a London without redemption.
4/10

The Kids Are All Right