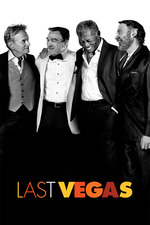 A criminal waste of a great cast.
Robert DeNiro, Michael Douglas, Morgan Freeman & Kevin Kline play a group of old friends who have a reunion in Vegas during a stag weekend as one of them prepare to marry a woman half his age.
Whilst there, they meet lounge singer Diana Boyle (Mary Steenburgen), who is quite honestly the film's saving grace.
I really don't know who this comedy was aimed at, as it plays upon the nostalgia value of its stars but gives them very little to work with aside from a bunch of careful jokes that are more concerned with being inoffensive rather than being funny.
Mary Steenburgen aside, the rest of the cast deserve better.  It really is the blandest of the bland, if only the writer & director gambled on something more edgy, this might have had more flavour.
5/10