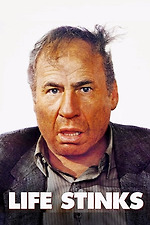 Mel Brooks first came to prominence following the success of 1968 comedy The Producers and saw a flurry of hits during the 1970's (Blazing Saddles, Young Frankenstein).
By the time the 90's had come around the writer-director-actor had lost a lot of his comedy zing, turning away from spoof in favour of a more slapstick style approach. This Capra-esque style farce, in which he plays a billionaire who takes a wager that he can't "live poor" for a month, isn't amongst his best works, but it certainly doesn't stink either.
5/10