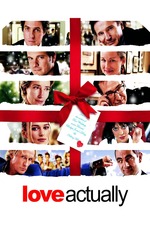 Rubbish Actually. Umpteen stories, multiple characters, but absolutely no chemistry. I don't know what alternate universe this movie is meant to be set in, but it's so incredibly subversive that it borders self-parody! In fact, there isn't very much in this movie about love either. It's all lust, obsession, infatuation and extra-marital affairs, and not one gay/lesbian storyline??? In the 21st century??? Really??? There isn't even a thread where the love interests represent an ethnic minority (although there is an interracial relationship), and for a film which is supposed to be about universal love, all the characters are pretty much the same.
All the women are a blank canvass without much individuality, while practically all the male characters in this movie are middle-aged, middle-class, charmingly befuddled, dithering fuddy-duddies. It's as though they knew they were going to cast Hugh Grant, but didn't know what role to offer him.
Bill Nighy steals this movie as an ageing rockstar vying for a Christmas hit with a novelty song. His story strands are the only ones to make me laugh and keep me interested. The rest is all absolute bollocks!
Nevertheless, this movie was very popular with its main demographic (women, people who like Eastenders) and spawned other ensemble rom-coms set during a holiday period (Valentine's Day, New Years Eve, Halloween)
It just wasn't for me.
5/10