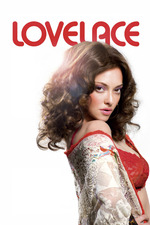 Lovelace is a part-biographical drama about pornographic actress Linda Lovelace, who rose to notorious fame after the 1972 release of Deep Throat, one of the most successful adult films of all time.
Amanda Seyfried is completely miscast in the lead role, but her performance is pretty good despite this. The main problem with the film is that it claims to be based on Lovelace's autobiography, yet her story changed a number of times before she became a born again Christian and her fourth revision went on to become a best-selling book. Omitting a lot, this portrays Lovelace less as a wild child at the turn of 1970's and more a religious innocent coerced into adult filmmaking by an oppressive, violent husband, with any reference to drug-taking and alcoholism completely removed.
For a more truthful retelling of events, the documentary Inside Deep Throat is far more faithful to the actual events rather than this women's lib drama which doesn't quite penetrate deep enough.
5/10