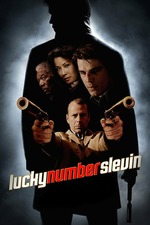 Style is very much over substance in this crime-action caper starring Josh Hartnett as Slevin, our protagonist who becomes involved in a dispute between two criminal gangs over a case of mistaken identity.
The narratively is purposefully convoluted to set up the twist ending, that would have worked much better without all the sleight of hand and smoke and mirrors that had preceded it, making the finale seem totally contrived and quite unconvincing.
Still, the film is quite enjoyable, even if it is just a poorer man's Lock, Stock & Two Smoking Barrels (qv).
6/10