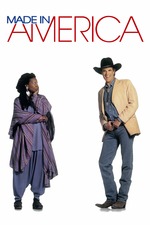 The stuff of sitcom, with Will Smith, fresh off the set of 'The Fresh Prince Of Bel Air' and Ted Danson fresh off the set of 'Cheers'.
The comedy in this film concerns a black teenager who is repulsed when she discovers that he real father is a white car salesman. Of course, if this were reversed the racism would be more obvious, but since it pokes fun at 'white trash' then it's perfectly okay. Double standards bullshit.
4/10