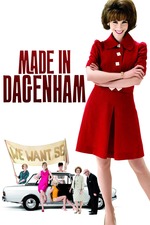 Made In Dagenham dramatises the events leading up to and involving the sewing machinist strike against the Ford motor company in 1968, where the working class women championed for equal pay.
Sally Hawkins plays Rita O'Grady, the leader behind the strike and the film focuses on her struggles both as an activist and domestically.
Overall, it's a fine film with good performances from the ensemble, but the entire production feels like it was made for television rather than cinema.
6/10