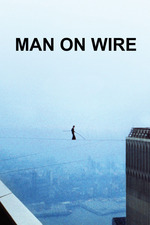 James Marsh's documentary focuses on the daring and illegal feat of a French tightrope walker who envisioned one of the greatest stunts in the history of the artistic skill; to walk above the void in-between the North and South towers of the World Trade Center. The truly mesmerising thing is that he did it, gaining access to the building with the help of an inside man and fake identity in order to pull off the stunt shortly before the building's grand opening in 1974.
There's a bit of dramatic fakery here and there, and Michael Nyman's musical cues sometimes feel out of place, but this is still an insightful diary into one man's intrepid dream, treading carefully between lunacy, ability, showmanship and obsession.
A feature film which focuses on the same events was released in 2015, titled The Walk (qv).
7/10

The Man Who Fell to Earth

Man on the Moon