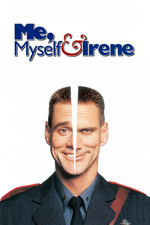 The Farrelly Brothers, whose previous credits include the gross-out comedies Dumb & Dumber, Kingpin & There's Something About Mary, tackle schizophrenia with this effort. Jim Carrey stars as a state trooper with a split personality who falls in love with the woman he has to escort to New York City.
The filmmakers found themselves in hot water for poking fun at this hidden ailment, which was a little harsh in hindsight. The main issue is that the film isn't particularly funny, banking on Jim Carrey's rubberface act to raise the laughter. Disappointing and irritating.
5/10