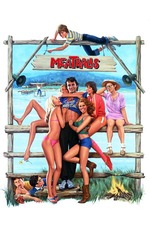 Shenanigans at a summer camp with a story that has been recycled in various forms in many years since.
Bill Murray plays the rather irresponsible but well-natured head counsellor, who takes a shy camper under his wing and tries to encourage his confidence. The rest of the plot concerns practical jokes and tomfoolery at the site, much in the vein of Saturday Night Live sketches and National Lampoon's humour around the same time.
Bill Murray is great in his breakthrough role, but the film itself is quite forgettable. It did spawn a host of sequels, though none of them really had any connection to the original film.
6/10