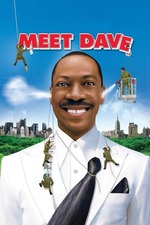 Anyone who read British comics The Beano, The Beezer and The Dandy may remember the strip The Numskulls, in which a human body was a vessel containing tiny people who controlled each body part.
Meet Dave is pretty much a film version of that, with Eddie Murphy playing a spaceship as well as the tiny captain within. The rest of the plot is your usual fish-out-of-water tale, with the bigger Murphy wandering around New York City and becoming more human with the help of Elizabeth Banks kindly single mother.
Though not as bad as some other Eddie Murphy films released around the same time (Norbit, etc.) this is far from his best work.
4/10