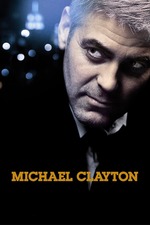 It wouldn't be hugely off the mark to describe this film as a mix between The Fugitive & Erin Brockovich, featuring an impressive performance from George Clooney as the title character.
As a "fixer" for a corporate law firm, he finds that he may have bitten off more than he can chew when they represent a guilty chemical company over a billion dollar law suit.
The pacing of the first 30-40 minutes does occasionally drag, but the opening act must be watched studiously to have an understanding grasp of what follows in the second & third acts.
Though it's amongst Clooney's best performances, the film's best players are Tom Wilkinson & Tilda Swinton (Swinton won an Oscar for Best Supporting Actress, while Wilkinson may well have if it wasn't for an astoundingly good performance from Javier Bardem in No Country For Old Men the same year).
An intelligent and thoroughly enjoyable legal thriller shot with some unique directorial flair.
8/10