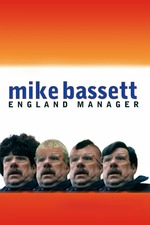 British-produced satire which pokes fun at the England football team, and though the jokes will be obvious to fans of football and those from England, anyone else is unlikely to cotton on to the humour.
This mockumentary begins with the breaking news that the current England football manager has suffered a fatal heart attack, and the bureaucratic suits at the Football Association have doubts over giving the job to the standout candidate (a reference to Brian Clough), so offer the job to an old-fashioned first division manager who is way out of his depth on the international stage, where the team still need to qualify for the upcoming World Cup.
The film is full of references to players present and past, including a pony-tailed goalkeeper, a playboy midfielder and a striker whose best days are behind him.
Overall, it won't be appreciated by anyone other than its intended audience, and feels like a feeble attempt to launch a film career for a television sitcom actor who was very popular at the time of release.
4/10