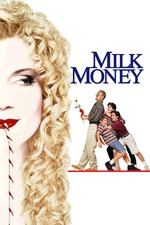 Some rather adult material bizarrely forms the basis for this family-friendly romantic comedy.
A group of 11-year-olds pool their milk money together so they can hire a prostitute, just so they can see a real pair of boobies.
A twist of events sees hooker-with-a-heart, V (Melanie Griffith), on the run from some monsters and take refuge at one of the boys houses, where she becomes romantically involved with the widowed father.
The plot is ridiculously contrived, but it's easy to breeze over this due to the pleasantries of Ed Harris' character and the chemistry he does strike up with Melanie Griffith.
The film could do without its more ridiculous aspects, including Malcolm McDowell hamming it up as a gangster.
The adult themes do make this a bit of muddled-up mess, but it's still reasonably easy to watch and does tread carefully so not to offend. If this was a real glass of milk, it would best be described as vanilla flavour.
5/10