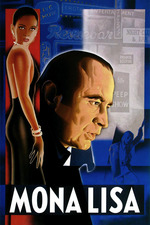 Mona Lisa could easily be described as a British version of Taxi Driver (qv), there are a few similarities between the two films, but not enough to accuse Neil Jordan's film of plagiarism.
Bob Hoskins plays George, an ex-convict released from prison after taking the fall for his gangster boss. Snubbed by his ex-wife and daughter, he goes to collect his earnings but is instead given a job as a chauffeur to high-class call girl, Simone (Cathy Tyson).
The relationship between the two is initially one of dislike, mostly due to George's bigotry, but soon develops into one of trust, and Simone asks him if he can locate the whereabouts of her friend, a fifteen-year-old girl who was forced into a life of prostitution by the same pimp.
The film shows a seedy side of 1980's London, but is softened by Bob Hoskins' excellent, brooding performance. Cathy Tyson is also brilliant, with a role that captures the exotic mystery of the Nat King Cole song "Mona Lisa", which plays frequently throughout the film.
8/10