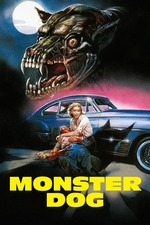 The title says it all really. It's a low budget spin on werewolf movies with Alice Cooper in the lead role. It isn't very good, but it isn't really trying to be. It doesn't quite fit into the 'so bad, it's good' genre of films either.
Cooper plays a rock star (so he's basically playing himself) who travels with his friends to his rural hometown to shoot a music video. Their visit coincides with devil dog attacks on the small town populace and it is discovered that Cooper's family have a hereditary legacy of a 'lycanthrope curse'.
There have been better episodes of the cartoon series Scooby Doo (which probably had better acting in too).
The enjoyment factor depends heavily on whether or not you like Alice Cooper. I do, but his presence isn't quite enough to carry the film. There is however, a great Alice Cooper-penned song which the film starts and ends with and that was enough for me to justify watching this.
3/10