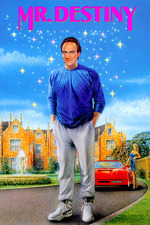 A modern twist on It's A Wonderful Life (qv) starring James Belushi as the regretful man in a midlife crisis, wondering if his life would be better had he hit a home run during his baseball-playing high school days.
The film is entertaining enough, with some decent performances from most and a sweet on-screen chemistry between Belushi & Linda Hamilton. In the grand scheme of things, hitting a homer is far too trivial a plot point as a life-changing event and doesn't convince in the same way that Frank Capra's perennial classic does.
5/10