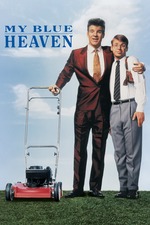 Following a hugely successful period during the 1980's, Steve Martin's fall from the spotlight began with this dull comedy, where he stars as a gangster, relocated in the witness protection programme, finding it hard to go straight, much to the chagrin of government agent Rick Moranis.
The performances feel miscast in this tepid comedy, particularly Steve Martin, who seems robbed of the wacky characteristics which make his performances so much fun. Even the comedian's biggest fans will be hard pressed to find much enjoyment from this.
The film was intended to be the comedy cousin of Martin Scorsese's Goodfellas, the novel upon which it was based was written by Nora Ephron's husband, Nicolas Pileggi. Unfortunately, it just doesn't work.
4/10