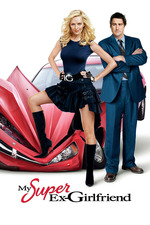 The basic premise of this superhero spoof had wings, but it's so shoddily written, even a decent talent in the director's chair (Ivan Reitman) can't do much to save it.
Uma Thurman plays the superhero G-Girl, who begins dating bumbling businessman Matt Saunders, who subsequently breaks it off when she becomes a little too jealous and crazy. It's a decision that turns out to be a mistake as she gets her revenge as only a superhero could.
As mentioned above, the general premise isn't too bad, but the female characters are so poorly written and the plot leans into misogyny so much that it becomes obvious very early on into the movie that the screenplay was clearly written by a man.
Uma Thurman is terrible and Anna Faris is boring, but I really don't know if the blame can lie with them since their characters are so poorly conceived.
There really could have been something here, perhaps if it was actually written from the perspective of a female superhero who discovers that her boyfriend is cheating on her.
Unfortunately, this is anything but super.
4/10