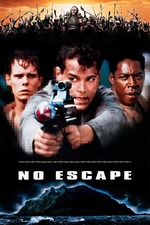 In the year 2022, a man is wrongfully convicted and imprisoned on a remote island where other inmates vie for supremacy in a land without guards, rules or law & order.
A curious mix of Papillon and Lord Of The Flies which doesn't quite work. Occasional action set pieces satisfy the attention span, but for the most part, a talented cast of actors are left stranded at sea.
5/10