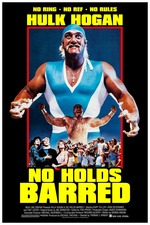 No Holds Barred is less a movie, and more a 93 minute promotion for some WWF (World Wrestling Federation) pay-per-view events, starring Hulk Hogan as the world champion who feuds with monster opponent, Zeus.
The plot is immaterial and the acting is amateurish at best, particularly from the lead, who can't even play a character that is effectively himself.
Soon after, Hulk Hogan & Tiny Lister (as Zeus) would feud at WWF events Summerslam, the Survivor Series and a one-off event, also called No Holds Barred.
Even wrestling fans would say this was quite poorly executed, but it did generate some interest in the sport at a time when it's popularity was climbing, so from a business point-of-view, it could be claimed that it was moderately successful, but that doesn't stop it being a rather terrible movie.
3/10