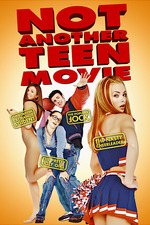 Not Another Teen Movie

There's more screenwriters than there are jokes in this parody of American Pie, She's All That & other teen-marketed movies released around the same time, ironic considering the production company who funded it is called Original Film.
Unfortunately, it's not particularly funny, and it doesn't spoof any of the films it intends to as it merely makes references to them. There may as well be winks to the camera every now and then, just to make it even more obvious. Not quite as bad as Epic Movie, Disaster Movie and all the other films of similar ilk, but it's not particularly good either.
4/10