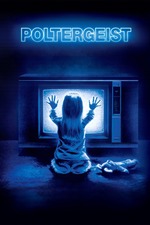 Tobe Hooper may be the credited director, but suspicions that producer Steven Spielberg had more than his two cents of input are justified. Even so, it remains one of the scariest haunted house movies of the post-1980's, with some rather excellent special effects for its time.
A regular suburban family experience a series of supernatural disturbances in their idyllic neighbourhood. Items of furniture move around on their own, a tree in the front garden moves by itself, a toy clown seems to come to life and the family's youngest daughter vanishes without a trace. The family hire a team of paranormal investigators and make some shocking discoveries about their home.
Whether or not you're a fan of ghost stories or horrors in general, Poltergeist is sure to leave you with goosebumps and tingles as its stories unfold. If not, then perhaps the occult happenings surrounding the film, both on set and following the filming of the production may be enough to give you the heebie-jeebies. I won't get into the details in this film review, but they're certainly worth an investigation into.
7/10