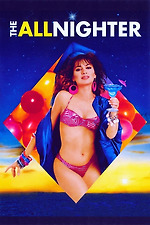 Three teenage girls celebrate the end of college with a party. That's the entire plot.
This is a pathetic attempt to try and launch Susanna Hoffs' career as a film star, partly because she's a terrible actress and also because the story and screenplay were equally as terrible. Hoffs is gorgeous to look at, but her talents were best spent as a singer with The Bangles, but the director of this was the popstar's parent, so she may very well think different.
One of the 1980's teen comedies which is best avoided... along with all movies which display such awful displays of nepotism.
3/10