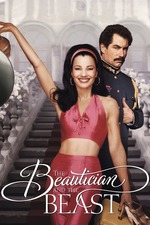 The Beautician and the Beast

More of a contemporary twist on The King & I than the film the title would suggest.
Fran Drescher plays a New York beautician who is hired as a teacher for the children of an Eastern European dictator (Timothy Dalton), who she begins to fall in love with after initially despising him.
If you can take Fran Drescher's accent (which sounds like fingernails across a blackboard), you may enjoy this romcom, but its appeal is very limited.
4/10