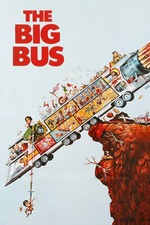 Four years before Jim Abrahams & The Zucker Brothers perfected the disaster movie parody with Airplane (qv), writer-producers Lawrence J. Cohen & Fred Freeman brought us The Big Bus, following the same soap opera formula as the staple movies of the genre (Airport, Earthquake, etc), except its all set on a nuclear-powered bus nicknamed "The Cyclops".
The goofy comedy is as you'd expect from a spoof, as are the performances from the ensemble cast.
Unfortunately, this came out the same year as the similarly themed Silver Streak (qv), which does a far better job with the genre(s) that it sends up.
It's probably worth a single trip on, but you wouldn't want a return journey.
5/10