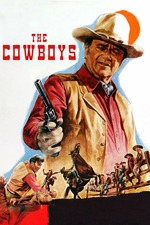 John Wayne does his usual as a grizzled cattle driver who, after being deserted by his ranch hands, enlists the help of eleven schoolboys to assist him.
After falling foul of three outlaws, they take on a mission of revenge.
A decent western, though it wasn't helped by being released in the wrong decade and does stretch on for a little too long.
Roscoe Lee Browne is probably the standout of the cast and the cinematography and music are very good.
A short-lived television series followed a few years later.
6/10