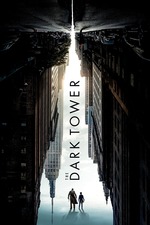 Intending to be the first episode in a series of movies and television shows, this adaptation of Stephen King's eight book series was over a decade in development and was released to practical silence. Needless to say that it's unlikely that the series will continue.
Set across parallel worlds, Walter Padick, an evil wizard also known as The Man In Black, is searching for a child's mind with the power to destroy the dark tower, a beacon which holds the universe together. Aiming to stop him is a young boy, Jake Chambers, from the real world as we know it, who joins forces with Roland Deschain, the Last Gunslinger, who has been in an eternal battle with The Man In Black.
This misguided attempt to bring a series of novels to the screen fails on multiple levels, the biggest one being that if you've not read any of the books, you won't have a clue what's going on. Another failure is the casting of Matthew McConaughey, who looks more like a shady lawyer than a malevolent wizard. Idris Elba is decent casting, but the screenplay lets him down with his cumbersome dialogue.
Quite possibly the biggest disappointment of 2017.
2/10