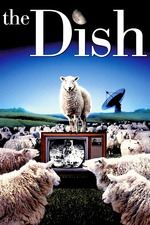 The Dish is an independent film from Australia that managed to get picked up for distribution by a major studio (20th Century Fox) after being noticed on the festival circuit.
It's a culture clash comedy set in a rural part of the outback, where a satellite dish is utilised for transmitting the iconic video footage from the Apollo 11 moon landing. An American member of NASA joins a group of Australian scientists to prepare for the transmission, which is threatened by power cuts, adverse weather and general incompetence by the Australian contingent.
The screenplay takes great glee in poking fun at the cultural polarisation and does have some incredibly funny moments and clever dialogue.
6/10