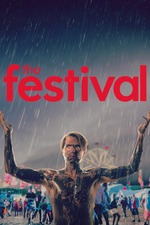 The television comedy The Inbetweeners may be long over, but Joe Thomas can still play the same character (practically) in this comedy directed by one of the TV show's creators.
After being dumped by his girlfriend on graduation day, Nick and his best friend, Shane, head off to a music festival for the weekend and find that she's attended the same venue. Nick tries to win her back and he & his friend get in various shenanigans along the way.
For anyone who's watched The Inbetweeners, this film offers no surprises for the kind of comedy you'll expect, and though it's puerile, silly nonsense, it's an easy film to watch without trying to be anything that it isn't. Personally, I think this was (slightly) better than I expected it to be.
4/10