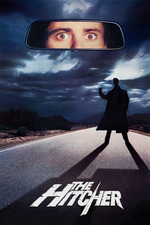 On a deserted Texas highway, a naïve teenager picks up a hitchhiker, unaware that he is a maniacal, psychopathic killer who plans to implicate the young boy in his crimes.
Rutger Hauer is deliciously evil in this road movie thriller, which occasionally suffers through being formulaic and has the odd scene which defies reasonable belief, but isn't a bad low-budget thriller from the mid-1980's. A remake was released in 2006, starring Sean Bean as the bad guy.
6/10