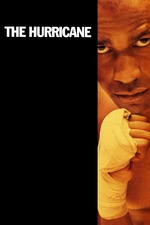 Denzel Washington delivers arguably his finest ever performance as Rubin 'Hurricane' Carter in this true story of an up-and-coming boxer falsely arrested for murder by a bigoted detective and consequently sentenced to three life sentences.
The film is very short on the boxer's sporting achievements, diving straight into his struggles in prison and the fight to clear his name.
The film would have been much better if it focused exclusively on the man and his struggles, but half the film is dedicated to a young black boy who is inspired by reading Carter's autobiography and joining the campaign to have the boxer freed from prison.
Denzel Washington truly carries the entire film, with a performance as fitting a tribute as Bob Dylan's eponymous song from the 1970's.
7/10