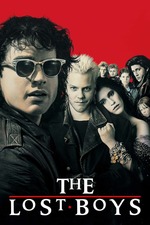 Twenty years ago, this film would have got a lot kinder rating out of ten, but unfortunately it's a film which clings to its nostalgic power rather than any other of its merits.
That being said, it has to be considered amongst the greatest movies of the 1980's simply because it found its way into the hearts of the VHS generation at the time of release.
Sam & Michael are two teenage brothers who, along with their mother, move to the carnival town of Santa Carla, where a gang of bikers with a dark secret seem to (literally) get away with murder.
Michael is seduced into the gang by a beautiful woman and is transformed into a vampire via a blood-drinking ritual. At the same time, Sam unites with the Frogg Beothers, who devise a plan to rid the town of the vampire gang.
Despite some rather silly moments, credit has to be given where it's due and The Lost Boys is truly one of the most enjoyable vampire films of all time (especially in comparison to the turgid nonsense which is passing for the sub-genre nowadays), as well as having one of the greatest movie soundtracks of all time.
Any film fan who grew up during the 1980's must have a copy of this film in their collection.
7/10