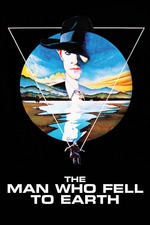 The weird and wonderful David Bowie made his cinematic breakthrough in this weird & wonderful science fiction cult favourite.
As an alien who arrives on earth to collect water for his own dying planet, he adopts the name Thomas Jerome Newton and plans to make financial gains selling the secrets of alien technology so he can afford to build a spacecraft for his return voyage, but eventually succumbs to the addictions of human sin, sex and alcohol.
The film is very much a product of its time, with the focus of Nicolas Roeg's direction being on an artful presentation rather than a traditional narrative.
A must-watch for Bowie fans, but it won't be enjoyed by the masses.
7/10