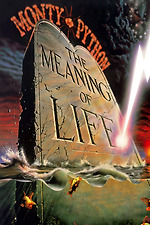 Unlike Monty Python's take on The Holy Grail and the Life of 'Brian', this film lacks a traditional narrative in favour of a series of sketches, akin to And Now For Something Completely Different, except exclusively covering the topics of life, death, sex, contraception, gluttony and other such sins & lessons in life.
The sketches are of varying quality, but none are funnier than the comedy groups previous works or, indeed, the sketches from their first vignette, And Now For Something Completely Different (qv).
There are occasional moments of amusement, but this is very hit-and-miss. A rare off day from a group of talented comedians.
6/10