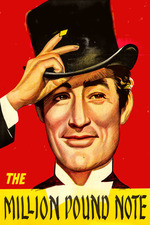 A twist on "Brewster's Millions" for a British audience with an American star, a man is given a million pounds in the form of a single note and is given the challenge of spending it without breaking into it.
The film has a slight charm about it, but doesn't have the weight of the best Ealing comedies. A pleasant watch, but nothing remarkable.
6/10

A Million Ways to Die in the West