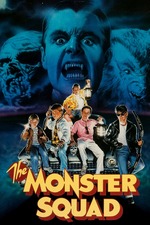 Typically tacky, teen-orientated 1980's cheese, throwing in all of the classic monsters of film & literary folklore (Dracula, Frankenstein, The Mummy, etc) with no real purpose or plot except to throw them all into a Goonies-style juvenile adventure.
It's very much a project of its own time, and wouldn't really be appreciated now unless you first watched it and enjoyed it upon its original release and simply fancied a bit of nostalgia.
It's probably a film which could be served well by a remake.
5/10