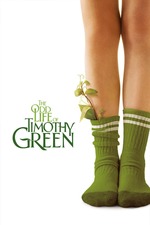 The Odd Life of Timothy Green

The Odd Life Of Timothy Green is a rather odd film. This Disney fantasy for a more mature audience seems to tick all the usual boxes for an Oscar-bait movie, but also fails on most counts.
A childless couple who are unable to conceive write a list of attributes for a perfect child during a wine-fuelled night and bury it in the garden. The next morning, a child has grown, a plant-like Jesus with leaves growing out of his ankles.
The attempted Christ parable really doesn't work here, and the acting isn't of any memorable standard to lift this above an average timekiller.
It will have a very niche market who will enjoy it most, but everyone else will just find it equally strange and mundane.
4/10

Of Mice and Men