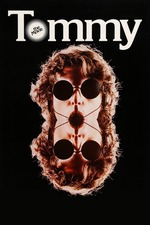 A rock opera based on the progressive rock album by The Who, starring the band's frontman as the title character, Tommy, a deaf, dumb and blind kid who sure plays mean pinball.
As a fan of the band & their music, it helps to watch this film, which is a rather psychedelic experience to say the very least.
The film does have some clever insights into the cult of celebrity, highlighted by the scene in which Eric Clapton plays the preacher of a church that worships Marilyn Monroe.
Ann-Margret is quite excellent as Tommy's mother, and the film does have a very unique visual style and an epic soundtrack, but unless you're a huge fan of the band, then you're unlikely to get a huge amount of enjoyment from this film adaptation of one of their greatest albums.
6/10