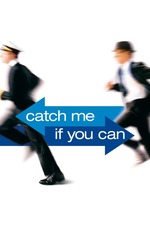 The 2000s was a bit of a strange decade for Steven Spielberg; though some of his movies raked in over hundreds of millions at the box office, he started to go down a different path and experiment with not only different genres but more adult-themed plots and storylines, after two decades catering to families and children. Some have been well-received, whereas, with 2001's A.I: Artificial Intelligence, it proved that even Spielberg can churn out a movie that is, in more ways than one, a dud.

Based on a true story, Catch Me If You Can is a Cat & Mouse tale where a teenage boy wants his parents to get back together again after financial woes split them up. Frank Abagnale becomes a conman and turns on the government by making counterfeit cheques and posing under various and different guises, such as a doctor, a Pan Am air pilot and lawyer, as well as trying to evade the law and the FBI, led by Carl, who are all on his trail.

Tonally, Catch Me If You Can is a bit of an oddity, but the charms of DiCaprio and Hanks make it a tad watchable and enjoyable, with the con artist, Frank scamming people, left, right and centre and eager sleuth, Joe trying to put a stop to his efforts. Leonardo DiCaprio, yet again, is trying to move on from the teen heartthrob tag he has built himself up with during the 1990s, & opting for meatier and diverse roles that challenge him as an actor, which he manages to prevail in. They hold this film together, along with Amy Adams. The main casting, as a whole, was impressive. The leads do lend themselves extremely well, and whilst it jumps around in places, there were little moments where I felt were nice. It's a pity, however, that there just weren't more of them. Hanks displayed a little more of his lighter side with the funny scenes, which was nice to see, however.

There are moments where Hanks's character goes after DiCaprio's Frank, and they were all right. However, even with Spielberg at the helm, he didn't make it grittier and compelling as it should have been and the story had me droning off at times. The film could easily shave off 20-30 mins off; again, it is too overlong, making the film a bit of a drudge to get through & whereby nothing of consequence happened or was said, and I'd be fine with that. And the female characters weren't written very well at all, which was another low point for this movie. The performances, as mentioned are very good to impressive, but their characters, at times feel a little one-note-ish and who don't express many emotions.

Despite the story heading off into different directions, the film itself never exploded on screen for me and never grabbed my attention, which it should have done. Alas, it feels far too safe for a story of this type, a bit too tidy, as well as plain with a pacing, which at times, dragged it down. It was also so one-sided, with much of the focus on Abagnale and less screen time on Carl.

There is no doubt that Spielberg is a terrific filmmaker and he manages to bring forth certain elements, such as the style and visuals, music, the story, to life. But whilst Catch Me If You Can is all right as a film, with a few tweaks and improvements, it would be even better. Despite these little niggles, it's still worth seeing if you haven't done so.

& thankfully, Spielberg did redeem himself, & with the help of DiCaprio & Tom Hanks, right after the tepid monstrosity that is, A.I.

It's not quite the absolute extravaganza one expects of this director, as widely renowned as himself, but it's not bad, still watchable in places & is more middle of the road fare, coming from him.