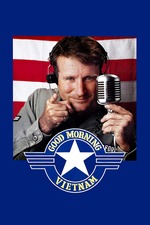 Good Morning, Vietnam finds hip and happening radio disc jockey Adrian Cronauer bringing his sense of fun and whimsical spontaneity into a world of despair as he touches down in Saigon; it is a world that seems to have little hope for the future, as the Vietnam war escalates further into chaos and gets more out of control. Williams's on-air antics and style resonates with the troops, if not with the main chiefs, who don't seem to see the funny side to it, given their lack of, or be it no sense of humour.

After arriving in Saigon, Cronauer becomes the new presenter of a show that consists of unpredictable humour, satirical tales, along with rock & roll music in place of bland and boring music selections and frequent news updates.

As well as being a DJ, Adrian also finds the time to bond with the locals, teaches English to a group of Vietnamese students in class and even falls in love with a girl, Trinh - despite that the girl doesn't love him back and that their culture forbids foreigners marrying or dating Vietnamese girls. As Adrian actively pursues the girl, he becomes friends with her brother and the two hit it off. They even take it in turns in trying out a disgusting looking noodle soup dish.

The plot thickens later on as Adrian becomes disillusioned and frustrated with news censorship by the generals & when revelations start to unravel and emerge involving Trinh's brother, Tuan and a bombing incident at a local bar and when Adrian is censored from broadcasting important information regarding that bombing, ensuing in a huge fallout between the generals & Adrian, as well as instant dismissal. The confrontation between Adrian and Tuan at the end of the movie makes for compelling viewing and is utterly riveting and intense. One could sense Adrian's anger and frustration, but also at the same time, you felt for and hated Tuan for what he did. Not because of what Adrian did to him, but because Tuan took his actions out on other people because he was angry at what the U.S did by bombing Vietnam. This is a pretty contentious issue - yet it also goes to show that unfortunately, that even though people are supposed to get along in spite and despite our differences, be it political, racial or whatever, some still can't let go and choose not to let go of the past and refuse to move on.

Though Robin doesn't play Adrian Cronauer in a portrayal that is so much alike his real self - who himself was far more conservative and pro-war in his views and as this is based on a true story-, he channels a nice compromise that suited Hollywood's taste for conflict. His role in the film was truly excellent and not too over-the-top and crazy in terms of humour that we have come to associate Robin with through Mrs Doubtfire and Mork & Mindy for example. He has such a rapid-fire, energetic delivery to his impromptu comedic style, the speed in which he spits out line after line is frenetic. He manages to hold attention whenever he is around. He even ad-libbed (speak without performing) most of his lines, some of which aren't part of the script. Being given the free reign to do and say some of the amusing and crazy things he said, allowed Robin to really bring the best out of his talents. He was funny but also frank, sincere and as Adrian, he really wanted to make a difference in their lives.

Some of my favourite scenes were Adrian teaching English, the bar brawl - as violent- if not overly violent as it was & when Adrian and some of the troops played a game of baseball/softball with his English students and the ending scene between himself & Tringh.

People ask how can someone make light work out of a difficult situation and take a topic such as war and turn it into something that captures people's attention without being too offensive; as a matter of fact, anyone can. Especially Barry Levinson (whose idea to add comedy to the mix paid dividends), and Robin Williams as Cronauer. It takes a lot of thought, imagination but also having an open mind and trying to consider other avenues & ways for a movie to convey its message, so that the audience has something to talk about, afterwards.

Not only that, there is a degree of subtlety, vulnerability and complexity in not just the script and the narrative, but through the characterisation and portrayal by Robin Williams as the main protagonist that really hits home and makes me want to find out and know more about Adrian. And his sense of purpose and responsibility as a human being, whilst out in a foreign country and trying to pay respect to its culture & understanding it. And that's in spite of the growing conflict and in-fighting taking place and people getting shot and killed.

Good Morning, Vietnam is not essential laugh out loud comedy, rather I'd classify it as a military dramedy that pretty much acts as a story, based on Cronauer's life experiences in Vietnam. It's not so much about the war itself, but the consequences of war and not being necessarily part of the fighting but how it affects people, as well as ways people live their own lives, despite it. For me, it was one of those films that I didn't really know or care much about when I was younger; I was 6 years old in 1987 and it was the war theme that didn't appeal to me much. But in re-watching Good Morning, Vietnam as an adult, time and time again, this film really hits home to me in ways that I appreciate how brilliant the cinematography is and was, how effortlessly the performances were, at what a brilliant movie this is and how amazing Robin's performance turned out to be and that he can be an utterly convincing performer, when given a good script & character to boot.

If there was one thing I didn't really enjoy about this film, it is Adrian trying to pursue Trinh and in his attempts at falling in love with her. I didn't buy into it and thus, I was glad that it didn't become an additional and overarching storyline, as the movie didn't need it.

This is my second favourite Robin Williams movie behind Hook, and whilst the star-studded crew, special effects, Peter Pan theme and art direction makes it my favourite movie, I cannot fathom how Good Morning, Vietnam fully encapsulates Robin's talents, both comedic and dramatic-wise. Director Barry Levinson pulled it out of the bag and thus forth, he has delivered a grade- A military dramedy that pulls no punches when it comes to depicting the horrors of war, but also shedding light on what is otherwise a harrowing situation and that comedy and humour can be effective in a way that we should always look on the bright side of life and that no matter how bad things can get, one doesn't and shouldn't let it get in the way of his/hers own happiness.

Right after Mork & Mindy had ended in 1982, in addition to Popeye and The World According to Garp, he did star in movies that weren't necessarily huge multi-million dollar blockbusters, but low-key and low-budget affairs during the early to mid-1980s. Some I enjoyed, though with others I'd wished they were a lot better. Though it took him around 5 years for Robin to make that breakthrough of which he had further sustained up until the late 1990s, at least with this offering, along with a great script, it fully showcased his dramatic, as well as improvisational comedic talents. If there was one movie that really put Robin Williams on the Hollywood movie map, and virtually established his film career, then I'm glad that movie was and is Good Morning, Vietnam'.

Even if you are not the biggest fan or follower of his work, but show an interest in the theme and subject matter itself, then one ought to appreciate this sterling effort.

He needed a breakout hit, and to show that the success of Mork & Mindy wasn't just a fluke, and this film really ticked all the right boxes.

It is Good Morning, Vietnam - not Mrs Doubtfire according to 99% of public opinion - that stands alone as (one of) Robin Williams's best movie(s) he's been involved in & most quintessential movie, in my humble opinion. This is the absolute and must- have essential film Robin Williams fans need to own and have in their DVD collection.

It is completely thought-provoking, amusing in parts with some added conflict and drama, & this conflict and drama provides the film with another angle in which to play off with, and it is also funny, touching, sad and it makes you think and that no matter our cultural differences, we can put them aside and still get along. Or make efforts to get along.

Good Morning, Vietnam is a must-see step back in time journey during the Vietnam conflict, as we witness the horrors and dire consequences of war that it brings, and the significance of comedy and humour used to dispel our woes and feelings of sadness and anger. The film has so many great performances, not just by Robin but from every single actor who brought their characters to life, in ways that speak to the audience.

Out of all the projects during his career, this one serves as Robin's most complete & comprehensive on-screen performance, and by complete, I meant by presenting on screen & displaying all of his serious and dramatic elements and humourous and comedic traits, without being too over-the-top and wacky. He might have been robbed of an Oscar, but he so deservedly received the 1988 Golden Globe for best performance in a motion picture for Comedy and drama ahead of Patrick Swayze, Danny DeVito and Steve Martin to name and for his captivating and multi-layered performance in Good Morning, Vietnam.

That image of Adrian's tears at the end of the film as he said goodbye to Tringh moved me so much, it always moves me to see Robin Williams break down, be it in character or not. Robin Williams may be well known to the world and to many general audiences as Mrs Doubtfire, which is also regarded as a favourite movie for so many people - yet all-round and conceivably, Good Morning, Vietnam is the pinnacle of, as well as the movie that launched his career in a big way in my opinion & this film would be nowhere as successful as it was, if it had been anyone else but Robin playing that role.

But anyhow, Good Morning, Vietnam is without a doubt, simply stunning.