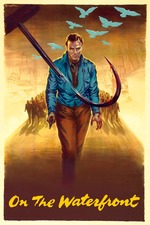 And so the Criterion Channel marathon continues!

This is one of the realest noirs out there, so ahead of its time. I'd say it's one of the first modern noirs, one that deals with moral ambiguity with a tone and subject matter that feels so "genuine" and so applicable to today.

And yet, this movie is also one of the most wholesome and inspirational movies I've ever seen. As I've said before, I love movies that showcase the struggle for greatness, that showcase characters struggling to be virtuous in a messy and complicated world of vice.

Let's talk about this movie's greatest asset: Marlon Brando. He blew me away. He has one of the most interesting faces I've ever seen. When people say that Marlon Brando was the first modern actor, I now have a better understanding of what that entails.

Whereas the juggernauts of the Golden Age (Bogart, Grant, Stewart) were known and casted for their inherent charm and rugged looks, Marlon Brando was the first to capture struggle and pain through his expressions and to internalize conflict and desire so honestly and realistically.

Whereas the Golden Age greats would consistently play themselves in the roles they were given (Bogart is a prime example of this), Brando became his own characters. Considering this movie came out in 1954, I can confidently say Marlon Brando's performance was far ahead of his time.

Andrew Laeddis summarizes this movie perfectly: "Which would be worse: to live as a monster, or to die as a good man?"