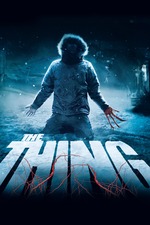 Scavenger Hunt #52
9/31
Task #27: A film that was remade at least 20 years after the original (soft reboots are acceptable).

Now, I understand this film is supposed to be a prequel , but I think that a film that involves the same creature doing the exact same shit to very similar people wielding very similar weapons making very similar choices counts as a remake. If you disagree, well, sue me.

Pretty enjoyable movie, but the vast majority speaks truths - the effects in this movie are absolute dog shit. What was so great about the 1982 film was the usage of practical effects, and this movie completely ignores that and wipes the film dry with standard, crappy Hollywood CG effects.

In a fragment: fun, but misses the point of the original.